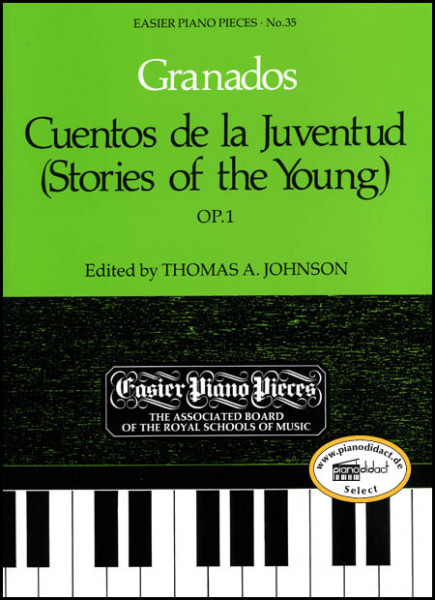 Enrique Granados, the Spanish pianist, teacher and composer, was born at Lérida on 27 July 1867 and spent most of his working life in Barcelona. He made several visits to Paris and to the United States, and it was on his return home after one of these latter trips that the ship, in which he and his wife were travelling, was torpedoed in mid-Channel by a German submarine on 24 March 1918. He was picked up by a lifeboat but was later drowned, while failing in his attempt to rescue his wife who was struggling in the water.

Granados was one of the founders of the modern indigenous school of piano music in Spain. He wrote many pieces for the Instrument, his masterpiece being the two sets of Goyescas, named after scenes from the paintings and tapestries of Goya. In addition to piano music, he wrote a number of orchestral works and operas, a little chamber music and some songs.

This edition of Cuentos de la juventud follows the original Spanish edition, but certain inconsistencies in marks of expression and articulation have been regularised, and a few obvious misprints corrected. Some marks of expression and dynamics have been added and others revised. Pedalling has been left to the discretion of the player except in a few instances. Titles of the pieces and other wording within the pieces have been translated. At the end of each piece a metronome mark has been suggested, but it is no way authoritative or binding.