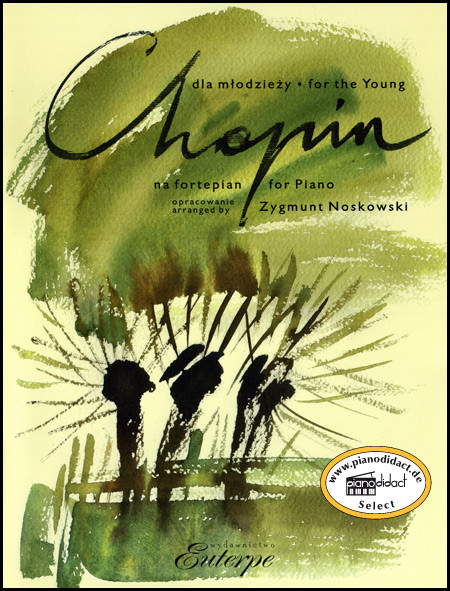 We offer you a unique publication. There are many reasons why this collection can be considered as such, but let us mention the most important ones. The obvious one is that any publication with Fryderyk Chopin's works is as unique as his music. Apart from original versions of his piano music, some adaptations that is transcriptions of his piano music for other instruments have been published for decades. But in this case we encounter a reverse situation. This publication includes a selection of Chopin's songs adapted to solo piano performance. The third and most important feature of this collection is its author. He is a renowned Polish composer and pedagogue from the end of 19th Century - Zygmunt Noskowski. We mentioned the most important facts from his life below and we hope that a low level of difficulty of the transcriptions gathered here will allow the youngest piano players to learn Chopin's compositions.

Zygmunt Noskowski was born on 2nd May, 1846 (three years before Chopin's death) in Warsaw. As a young boy he learned violin and piano play, but he started a regular music education only in 1864 when he joined Musical Institute in Warsaw. At first he put more emphasis on violin play which he studied under the supervision of Apolinary Katski, but he gradually put more emphasis on composition activities (Stanislaw Moniuszko taught him harmony at the time). After completing his studies at the institute he played at opera orchestra for two years. At that time he showed interest in teaching, especially vocal teaching. He devoted himself to this task with the whole heart and until the end of his life. Thanks to the fellowship he obtained, since 1872 to 1874 he studied composition in Berlin under the supervision of Frederick Kiel. He composed two symphonies at that time, overture Morskie Oko and Piano Quartet in D minor. In l875 after marrying Stanislawa Segedy, he settled down in Constance. Noskowski returned to Warsaw in 1881. He started to supervise Warsaw Musical Association. In 1888 he was appointed for the position of a counter-point and composition professor at Warsaw conservatory. His students included Mieczyslaw Karfowicz and Karol Szymanowski. In 1896 Noskowski composed his legendary masterpiece - Step, and he adapted Chopin's Songs for solo piano performance around 1900. Zygmunt Noskowski diedon23rdjuly, 1909 in Warsaw.

The Handsome Lad
Death's Divisions
The Ring
The Betrothed
My Sweetheart