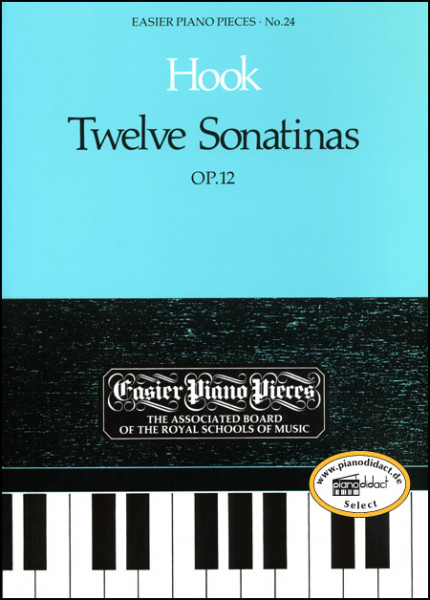 Despite being born with crippled feet, James Hook (1746-1827) was one of the most popular organists of 18th-century England, although his work lay in the field of entertainment rather than in the church. He had been precociously gifted, performing concertos in his native town of Norwich at the age of six, and composing a bailad opera two years later; but in his late teens he moved to London and quickly made a name for himself as a composer of attractive light songs. In his early twenties he became organist and composer at Marylebone Gardens, and a few years later he took up a similar post at Vauxhall Gardens, holding this for nearly half a Century. He was an immensely prolific composer - more than 2,000 songs (of which the best known today is The Lass of Richmond Hill), 30 or so stage works, about 20 concertos, and quantities of instrumental music.

The present collection, his Op.12, was published in London about 1775 as Twelve Sonatinos [sic] for the Harpsichord or Piano-Forte for the use of Scholars. The original is almost entirely lacking in marks of phrasing or dynamics (except those in bars 28, 30, 32 & 34 of no.7).